skip to main | skip to sidebar

Wow, it's been THAT long?

Hey all...2 of you! Sorry I've been a no-show on this blog. I was hard at work on two projects that I just wrapped up the other day. Both of which, I'll make special posts for, but for right now please take a gander at my latest animation, Survival of the Fetish!

It's an entry in the FOX holiday animation competition, which I'm super excited about. Check it out!
Posted by BeaPeaBear at 10:32 AM 1 comment:

I'm knee-deep in making an animatic right now(which I'll explain and post when I'm finished), but I wanted to take a break for a bit and post a picture. 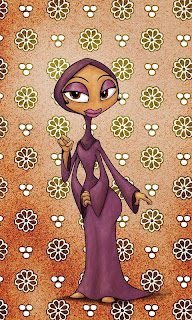 Here we are, a lovely Arabian....ant.
There's a bit of information behind this, actually. And I feel I should probably explain myself a bit, this being the first picture and all.
First of all, yeah, she's an ant. That's why she has four ar
ms. I draw a lot of bug characters for some reason. Whenever I would doodle in my notebook or while on the phone or taking a break or something, my drawings always tend to lead towards bugs. I don't know, I guess I like bug cartoon characters because there's really no wrong way to draw a bug. You can exaggerate any feature, add any number of appendages, put as many eyes on them, and people would still say "Hey, nice bug!" They're like aliens or monsters, you can draw them almost any way you want and people would still recognize them. And for a cartoonist, this limitless exaggeration is most of the fun.
Second, a few months ago, I attended a design conference in Doha, Qatar. Qatar's a country right on the edge of Saudi Arabia, along the Arabian Gulf. It was also a trip for school, the art university I attended (VCU) has a sister school there, and we got to visit the facilities. There, I met a bunch of nice students, got to observe their art projects and even help out on a few. The Arabian influence was refreshing, since I was in a major where whether or not you were influenced by anime meant how your work was going to look.
While there, I was inspired to draw, make, or animate something Arabian-themed, and of course, what did I start drawing? Bugs. Ants, in particular. I picked ants for one of two reasons. One was that cartoon ants are either soldiers, or defending their ant hills from grasshoppers, I've never seen an ant drawn with an abaya or something like that. The second reason was I drew a comic in high school about Arabian ants, and thought I'd resurface that idea.
This picture in particular I sketched the week after I got home and never did anything with it until recently. I believe her clothes should really be black, but I chose purple because it was a little easier to see. Also the pattern in the background is based on some pottery I saw while visiting the museum of Islamic art. Pretty cool.
So there you have it. And here's some of the sketches I made over the trip if you're interested: 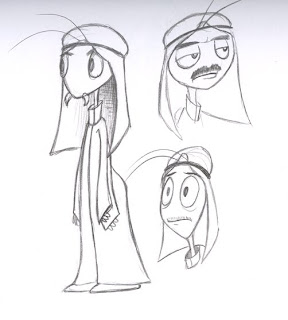 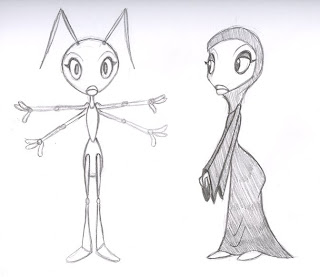 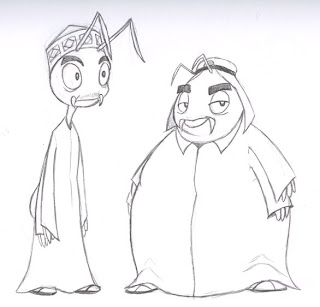 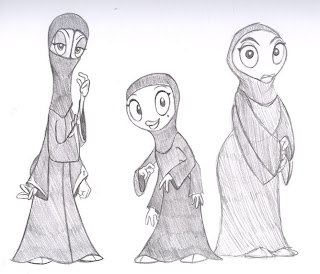 My portfolio site is finally up.
http://www.brianbearanimation.com/
Enjoy!
Seeyas.
-Brian
Posted by BeaPeaBear at 2:56 PM No comments:

Hello folks. My name's Brian, and I'm cartoonist, illustrator, and amateur animator. But of course, that just boils down to that I doodle a lot. A whole lot. I just graduated from art college (perfect timing, as always. At least I didn't go into the automotive industry.) and I want a place to put up whatever drawings, sketches, doodles and animations I feel like sharing with my friends and family. Also any other crap that's on my mind. So sit back, relax, and wait patiently for me to update this thing again.
Seeyas.
-Brian
Posted by BeaPeaBear at 12:52 PM No comments: